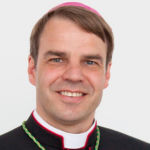 Why Is Stefan Oster Influential?

According to Wikipedia, Stefan Oster is a German bishop of the Roman Catholic Church who serves as the 85th Bishop of Passau. Early life Oster was born on June 3, 1965 in Amberg, a town in Bavaria, Germany. He graduated from Neutraubling high school and later trained as a newspaper - and a radio editor from 1984 to 1986. He spent some years working in this profession. From 1988 he started his studies in philosophy, history and religious studies in Regensburg, Kiel, at Keele University and the University of Oxford. From 1990 to 1991 he was a Fellow in the Erasmus Programme of the European Union. He graduated from Oxford in 1993 with a Master of Studies and a Master of Arts from Regensburg in 1994.

Other Resources About Stefan Oster

What Schools Are Affiliated With Stefan Oster?

Stefan Oster is affiliated with the following schools: