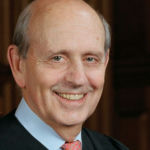 Why Is Stephen Breyer Influential?

According to Wikipedia, Stephen Gerald Breyer is an American lawyer and jurist who has served as an associate justice of the Supreme Court of the United States since 1994. He was nominated by President Bill Clinton, and replaced retiring justice Harry Blackmun. Breyer is generally associated with the liberal wing of the Court.

Other Resources About Stephen Breyer

What Schools Are Affiliated With Stephen Breyer?

Stephen Breyer is affiliated with the following schools: