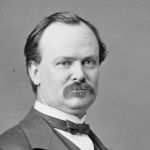 Why Is Stephen G. Burbridge Influential?

According to Wikipedia, Stephen Gano Burbridge , also known as "Butcher" Burbridge or the "Butcher of Kentucky", was a controversial Union general during the American Civil War. In June 1864 he was given command over the Commonwealth of Kentucky, where guerrillas had carried out attacks against Unionists. He imposed martial law and was criticized for punitive actions against persons accused of being guerrillas.

Other Resources About Stephen G. Burbridge

What Schools Are Affiliated With Stephen G. Burbridge?

Stephen G. Burbridge is affiliated with the following schools: