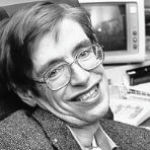 Why Is Stephen Hawking Influential?

Stephen Hawking was born in Oxford, England in 1942 and died in March of 2018. He attended University College, Oxford where he received a BA in physics. Within his first year as a PhD student at Trinity Hall, Cambridge, Hawking’s speech became difficult to understand and he started to have difficulty walking. He was diagnosed with Lou Gehrig’s disease and predicted to only live another two years. Luckily his disease progressed much more slowly than anticipated. It’s a good thing, because he is widely considered one of the greatest physicists of the 20th century. Hawking was Lucasian Professor of Mathematics at the University of Cambridge between 1979 and 2009, and Director of Research at the Centre for Theoretical Cosmology at the University of Cambridge until his death in 2018.

Hawking was a polymathic physicist of sorts, known for his work in theoretical physics as well as cosmology, and he would become a best-selling author with the publication of his book about the universe, A Brief History of Time (first published in 1988). He collaborated with noted mathematical physicist Roger Penrose (also in this list—in fact, he’s next) to study theories about black holes, an area of physics known as “gravitational singularity theorems” and utilizing Einstein’s theory of general relativity. Hawking proved that black holes do emit radiation, a phenomenon appropriately titled “Hawking radiation.” He was the first physicist to combine the theory of relativity and quantum mechanics (basically, theories of the very large and the very small) to explain cosmology—a scientific explanation of the universe. He was also a proponent of the many worlds interpretation in cosmology, where due to quantum effects there are more than one actual universes (strange stuff).

As you might expect, Hawking was honored for his groundbreaking work in physics. He was a Fellow of the Royal Society, and a recipient of the Presidential Medal of Freedom, the highest civilian award in the United States. In 2002, the BBC named Hawking number 25 in its list of all-time greatest Britons.

Other Resources About Stephen Hawking

What Schools Are Affiliated With Stephen Hawking?

Stephen Hawking is affiliated with the following schools:

What Are Stephen Hawking's Academic Contributions?

Stephen Hawking has made the following academic contributions: