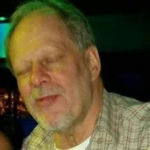 Why Is Stephen Paddock Influential?

According to Wikipedia, Stephen Craig Paddock was an American mass murderer who perpetrated the 2017 Las Vegas shooting. Paddock opened fire into a crowd of approximately 22,000 concert-goers attending a country music festival on the Las Vegas Strip, killing 60 people and injuring 867 . Paddock committed suicide in his hotel room following the shooting. The incident is the deadliest mass shooting by a lone shooter in United States history. Paddock's motive remains officially undetermined, and the possible factors are the subject of speculation.

Other Resources About Stephen Paddock

What Schools Are Affiliated With Stephen Paddock?

Stephen Paddock is affiliated with the following schools: