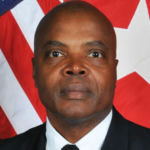 Why Is Stephen Twitty Influential?

According to Wikipedia, Stephen M. Twitty is a retired lieutenant general in the United States Army. Twitty assumed command of First United States Army on July 15, 2016, relinquishing command to become deputy commander of United States European Command on 9 August 2018. Previously, he was commanding general of Fort Bliss and the 1st Armored Division. Twitty was awarded the Silver Star during Operation Iraqi Freedom. Noted for his relationship with journalist David Bloom, who was embedded with his battalion during the invasion of Iraq in 2003. He has served in five combat deployments, including tours in the Gulf War, Afghanistan, Iraq, and Kuwait. He has commanded at the company, battalion, and brigade level during the wars in Iraq and Afghanistan. Twitty is a graduate of South Carolina State University and a member of the Omega Psi Phi fraternity. He was inducted into the South Carolina State University ROTC Hall of Fame in 2009, and selected as one of the University's Distinguished Alumni in 2004.

Other Resources About Stephen Twitty

What Schools Are Affiliated With Stephen Twitty?

Stephen Twitty is affiliated with the following schools: