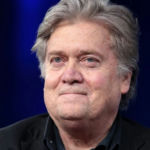 Why Is Steve Bannon Influential?

According to Wikipedia, Stephen Kevin Bannon is an American media executive, political strategist, and former investment banker, who served as the White House's chief strategist in the administration of U.S. President Donald Trump during the first seven months of Trump's term. He is a former executive chairman of Breitbart News, and previously served on the board of the now-defunct data-analytics firm Cambridge Analytica.

Other Resources About Steve Bannon

What Schools Are Affiliated With Steve Bannon?

Steve Bannon is affiliated with the following schools: