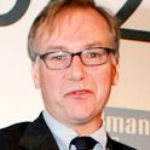 Why Is Steve Coll Influential?

According to Wikipedia, Steve Coll is an American journalist, academic and executive. He is currently the dean of the Columbia University Graduate School of Journalism, where he is also the Henry R. Luce Professor of Journalism. A staff writer for The New Yorker, he served as the president and CEO of the New America think tank from 2007 to 2012.

Other Resources About Steve Coll

What Schools Are Affiliated With Steve Coll?

Steve Coll is affiliated with the following schools:

What Are Steve Coll's Academic Contributions?

Steve Coll has made the following academic contributions: