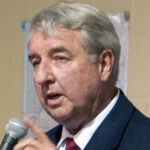 Why Is Steve Cooley Influential?

According to Wikipedia, Stephen Lawrence Cooley is an American politician and prosecutor. He was the Los Angeles County District Attorney from 2000 to 2012. Cooley was re-elected in 2004 and again in 2008. In 2010, Cooley won the Republican nomination for California Attorney General against John C. Eastman and Tom Harman in the June 8 primary election. During the general election campaign, Cooley said he would defend Proposition 8, a 2008 ballot measure that banned same-sex marriages in California but was then being appealed in the federal courts. Cooley lost to the Democratic nominee, San Francisco District Attorney Kamala Harris, in the November 2 general election, a close race, the results of which were not finalized until November 24, 2010.

Other Resources About Steve Cooley

What Schools Are Affiliated With Steve Cooley?

Steve Cooley is affiliated with the following schools: