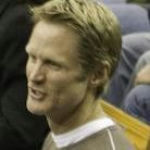 Why Is Steve Kerr Influential?

According to Wikipedia, Stephen Douglas Kerr is an American professional basketball coach and former player who is the head coach of the Golden State Warriors of the National Basketball Association . He is a nine-time NBA champion, having won five titles as a player as well as four with the Warriors as a head coach. Kerr is the only NBA player to win four straight NBA titles after 1969. Kerr has the highest career three-point field goal percentage in NBA history for any player with at least 250 three-pointers made. He also held the NBA record for the highest three-point percentage in a season at 52.4% until the record was broken by Kyle Korver in 2010.

Other Resources About Steve Kerr

What Schools Are Affiliated With Steve Kerr?

Steve Kerr is affiliated with the following schools: