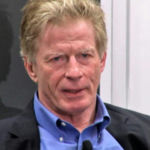 Why Is Stuart Stevens Influential?

According to Wikipedia, Stuart Stevens is an American travel writer and political consultant. He was the cofounder of Washington, D.C. - based political media consultancy Stevens & Schriefer Group . In 2013, he became a founding partner in Strategic Partners & Media. He served as a top strategist for Mitt Romney's 2012 presidential campaign in addition to several other significant presidential campaigns over the course of his career. He later joined The Lincoln Project, a Republican Never Trump group for the 2020 United States presidential election.

Other Resources About Stuart Stevens

What Schools Are Affiliated With Stuart Stevens?

Stuart Stevens is affiliated with the following schools: