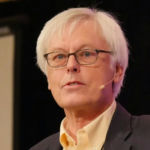 Why Is Stuart Vyse Influential?

According to Wikipedia, Stuart Vyse is an American psychologist, teacher, speaker and author who specializes in belief in superstitions and critical thinking. He is frequently invited as a speaker and interviewed by the media as an expert on superstitious behavior. His book Believing in Magic: The Psychology of Superstition won the American Psychological Association's William James Book Award.

Other Resources About Stuart Vyse

What Schools Are Affiliated With Stuart Vyse?

Stuart Vyse is affiliated with the following schools: