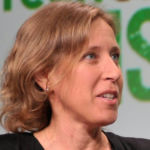 Why Is Susan Wojcicki Influential?

According to Wikipedia, Susan Diane Wojcicki is an American business executive who is the CEO of YouTube. She has been in the tech industry for over 20 years. Wojcicki was involved in the founding of Google, and became Google's first marketing manager in 1999. She later led the company's online advertising business and was put in charge of Google's original video service. After observing the success of YouTube, Wojcicki proposed the acquisition of YouTube by Google in 2006, and has served as CEO of YouTube since 2014.

Other Resources About Susan Wojcicki

What Schools Are Affiliated With Susan Wojcicki?

Susan Wojcicki is affiliated with the following schools: