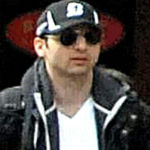 Why Is Tamerlan Tsarnaev Influential?

According to Wikipedia, Tamerlan Anzorovich Tsarnaev was a Kyrgyz-American terrorist of Chechen descent who, with his brother Dzhokhar Tsarnaev, planted pressure cooker bombs at the Boston Marathon on April 15, 2013. The bombings killed three people and reportedly injured as many as 264 others. Tsarnaev was of Chechen and Avar descent. He emigrated to the United States in 2004 at the age of 18. At the time of the bombings, Tsarnaev was an aspiring boxer.

Other Resources About Tamerlan Tsarnaev

What Schools Are Affiliated With Tamerlan Tsarnaev?

Tamerlan Tsarnaev is affiliated with the following schools: