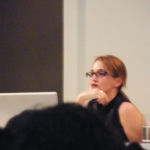 Why Is Tatiana Bilbao Influential?

According to Wikipedia, Tatiana Bilbao Spamer is a Mexican architect whose works often merged geometry with nature. Her practice focuses on sustainable design and social housing. She founded Tatiana Bilbao ESTUDIO in 2004 and has completed projects in China, France, the United States, Mexico, Guatemala, among others. Representative projects include the Botanical Garden of Culiacán, Sinaloa, the exhibition hall of a park located in Jinhua, China and a prototype of sustainable social housing of 62 m² with the capacity to duplicate with a cost of 120 thousand Mexican pesos, that was presented at the Chicago Architecture Biennial in 2015, and originally screened in Chiapas, Mexico.

Other Resources About Tatiana Bilbao

What Schools Are Affiliated With Tatiana Bilbao?

Tatiana Bilbao is affiliated with the following schools: