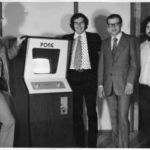 Why Is Ted Dabney Influential?

According to Wikipedia, Samuel Frederick Dabney Jr. was an American electrical engineer, and the co-founder, alongside Nolan Bushnell, of Atari, Inc. He is recognized as developing the basics of video circuitry principles that were used for Computer Space and later Pong, one of the first and most successful arcade games.

Other Resources About Ted Dabney

What Schools Are Affiliated With Ted Dabney?

Ted Dabney is affiliated with the following schools: