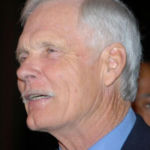 Why Is Ted Turner Influential?

According to Wikipedia, Robert Edward Turner III is an American entrepreneur, television producer, media proprietor, and philanthropist. As a businessman, he is known as founder of the Cable News Network , the first 24-hour cable news channel. In addition, he founded WTBS, which pioneered the superstation concept in cable television, which later became TBS.

Other Resources About Ted Turner

What Schools Are Affiliated With Ted Turner?

Ted Turner is affiliated with the following schools:

What Are Ted Turner's Academic Contributions?

Ted Turner has made the following academic contributions: