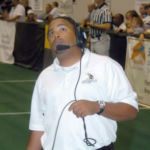 Why Is Teddy Keaton Influential?

According to Wikipedia, Teddy Keaton is an American football coach. Keaton currently serves as the head football coach of Allen University. Keaton was born in Brewton, Alabama. Keaton previously served as the running backs coach of the Miles College Golden Bears. Keaton graduated from Stillman College in 1999 and served as an assistant coach under Theophilus Danzy through the 2004 season. From Stillman, he served as the defensive coordinator with the Odessa Roughnecks and as head coach of both the Lakeland Thunderbolts and Huntington Heroes arena football teams before returning to college coaching. He served as defensive backs coach for one season before becoming offensive coordinator at Webber International University between 2008–2010. On December 2, 2010, Keaton was hired to replace L. C. Cole as head coach at Stillman. After the 2015 season, Stillman discontinued its football program. Keaton's record at Stillman was 27 wins and 26 losses.

Other Resources About Teddy Keaton

What Schools Are Affiliated With Teddy Keaton?

Teddy Keaton is affiliated with the following schools: