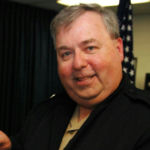 Why Is Terry McCreary Influential?

According to Wikipedia, Admiral Terry L. "T" McCreary is a retired one-star admiral in the United States Navy and served as the Chief of Naval Information reporting to the Secretary of the Navy, overseeing the Navy's global public affairs program. Before that, McCreary served as Special Assistant to the Chairman of the Joint Chiefs of Staff. His naval career included leadership positions in a variety of naval and joint assignments. McCreary retired from the Navy in 2006 after 27 years of service, then served as the Strategic Communication Director of the U.S. Special Operations Command and the National Counterterrorism Center.

Other Resources About Terry McCreary

What Schools Are Affiliated With Terry McCreary?

Terry McCreary is affiliated with the following schools: