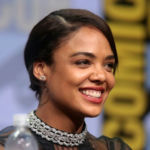 Why Is Tessa Thompson Influential?

According to Wikipedia, Tessa Lynne Thompson is an American actress. She began her professional acting career with the Los Angeles Women's Shakespeare Company while studying at Santa Monica College. She appeared in productions of The Tempest and Romeo and Juliet, the latter of which earned her a NAACP Theatre Award nomination. Her breakthrough came with leading roles in Tina Mabry's independent drama film Mississippi Damned and Tyler Perry's For Colored Girls , an adaptation of the 1976 play of the same name.

Other Resources About Tessa Thompson

What Schools Are Affiliated With Tessa Thompson?

Tessa Thompson is affiliated with the following schools: