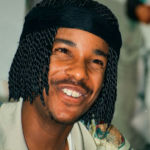 Why Is Tevin Campbell Influential?

According to Wikipedia, Tevin Jermod Campbell is an American singer and songwriter. He performed gospel in his local church from an early age. Following an audition for jazz musician Bobbi Humphrey in 1988, Campbell was signed to Warner Bros. Records. In 1989, Campbell collaborated with Quincy Jones performing lead vocals for "Tomorrow" on Jones' album Back on the Block and released his Platinum-selling debut album, T.E.V.I.N. The album included his highest-charting single to date, "Tell Me What You Want Me to Do", peaking at number 6 on the Billboard Hot 100. The debut album also included the singles "Alone With You" , and "Goodbye".

Other Resources About Tevin Campbell