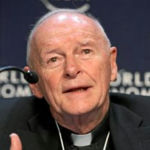 Why Is Theodore McCarrick Influential?

According to Wikipedia, Theodore Edgar McCarrick is a laicized American bishop and former cardinal of the Catholic Church. Ordained a priest in 1958, he became an auxiliary bishop of the Archdiocese of New York in 1977, then became Bishop of Metuchen, New Jersey, in 1981. From 1986 to 2000, he was Archbishop of Newark. He was created a cardinal in February 2001 and served as Archbishop of Washington from 2001 to 2006. Following credible allegations of repeated sexual misconduct towards boys and seminarians, he was removed from public ministry in June 2018, became the first cardinal to resign from the College of Cardinals because of claims of sexual abuse in July 2018, and was laicized in February 2019. Several honors he had been awarded, such as honorary degrees, were rescinded.

Other Resources About Theodore McCarrick

What Schools Are Affiliated With Theodore McCarrick?

Theodore McCarrick is affiliated with the following schools: