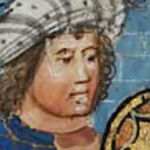 Why Is Thomas Becket Influential?

According to Wikipedia, Thomas Becket , also known as Saint Thomas of Canterbury, Thomas of London and later Thomas à Becket , was Archbishop of Canterbury from 1162 until his murder in 1170. He is venerated as a saint and martyr by the Catholic Church and the Anglican Communion. He engaged in conflict with Henry II, King of England, over the rights and privileges of the Church and was murdered by followers of the king in Canterbury Cathedral. Soon after his death, he was canonised by Pope Alexander III.

Other Resources About Thomas Becket

What Schools Are Affiliated With Thomas Becket?

Thomas Becket is affiliated with the following schools: