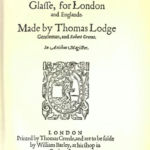 Why Is Thomas Lodge Influential?

According to Wikipedia, Thomas Lodge was an English writer and medical practitioner whose life spanned the Elizabethan and Jacobean periods. Biography Thomas Lodge was born about 1558 in West Ham, the second son of Sir Thomas Lodge, Lord Mayor of London, by his third wife Anne , daughter of Henry Luddington , a London grocer. He was educated at Merchant Taylors' School and Trinity College, Oxford; taking his BA in 1577 and MA in 1581. In 1578 he entered Lincoln's Inn, where, as in the other Inns of Court, a love of letters and a crop of debts were common.

Other Resources About Thomas Lodge