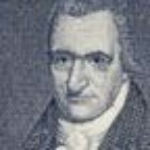 Why Is Thomas Paine Influential?

According to Wikipedia, Thomas Paine was an English-born American political activist, philosopher, political theorist, and revolutionary. He authored Common Sense and The American Crisis , two of the most influential pamphlets at the start of the American Revolution, and helped inspire the patriots in 1776 to declare independence from Great Britain. His ideas reflected Enlightenment-era ideals of transnational human rights.

Other Resources About Thomas Paine

What Are Thomas Paine's Academic Contributions?

Thomas Paine has made the following academic contributions: