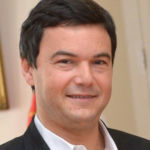 Why Is Thomas Piketty Influential?

Piketty is an expert in the study of economic inequality. In his research, he uses a longitudinal approach, drawing from centuries of historical data to better understand the long term impacts of various economic policies for wealth distribution. A vocal proponent for global wealth redistribution, he has concluded that systemic income inequality will never self-correct. Instead, solutions such as a progressive global tax may prove effective.

In Capital in the Twenty-First Century, he suggests that solving income inequality will require deliberate action, but most importantly, that solving income inequality by reforming capitalism is necessary for the ongoing survival of democracy. He has written numerous books in French and English, but this book was his most highly acclaimed, earning him the British Academy Medal and reaching #1 on The New York Times bestseller list for nonfiction.

In 2015, he turned down the French Legion Medal of Honour on the principle that he would rather be honored by his peers than the government.

Other Resources About Thomas Piketty

What Schools Are Affiliated With Thomas Piketty?

Thomas Piketty is affiliated with the following schools:

What Are Thomas Piketty's Academic Contributions?

Thomas Piketty has made the following academic contributions: