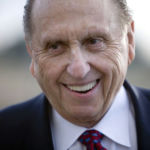 President of the Church of Jesus Christ of Latter-Day Saints

Why Is Thomas S. Monson Influential?

According to Wikipedia, Thomas Spencer Monson was an American religious leader, author, and the 16th President of The Church of Jesus Christ of Latter-day Saints . As president, he was considered by adherents of the religion to be a prophet, seer, and revelator. Monson's early career was as a manager at the Deseret News, a Utah newspaper owned by the LDS Church. He spent most of his life engaged in various church leadership positions and public service.

Other Resources About Thomas S. Monson

What Schools Are Affiliated With Thomas S. Monson?

Thomas S. Monson is affiliated with the following schools: