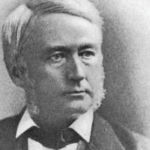 Why Is Thomas A. Scott Influential?

According to Wikipedia, Thomas Alexander Scott was an American businessman, railroad executive, and industrialist. In 1861, President Abraham Lincoln appointed him to serve as U.S. Assistant Secretary of War, and during the American Civil War railroads under his leadership played a major role in the war effort. He became the fourth president of the Pennsylvania Railroad , which became the largest publicly traded corporation in the world and received much criticism for his conduct in the Great Railroad Strike of 1877 and as a "robber baron." Scott helped negotiate the Republican Party's Compromise of 1877 with the Democratic Party; it settled the disputed presidential election of 1876 in favor of Rutherford B. Hayes in exchange for the federal government pulling out its military forces from the South and ending the Reconstruction era. In his final years, Scott made large donations to the University of Pennsylvania.

Other Resources About Thomas A. Scott