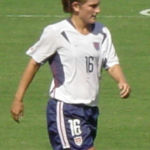 Why Is Tiffeny Milbrett Influential?

According to Wikipedia, Tiffeny Carleen Milbrett is an American former professional soccer forward who was a longtime member of the United States women's national team. In May 2018 the National Soccer Hall of Fame announced Milbrett will be enshrined in the Hall. A native of Oregon, she starred at the University of Portland where she scored a then school record 103 goals during her career. She won an Olympic gold medal in 1996 in Atlanta and a silver medal at the 2000 Olympics in Sydney. She also played in three World Cups, winning in 1999. She is in the top five all-time in the United States national soccer team in three offensive categories.

Other Resources About Tiffeny Milbrett

What Schools Are Affiliated With Tiffeny Milbrett?

Tiffeny Milbrett is affiliated with the following schools: