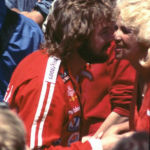 Why Is Tim Richmond Influential?

According to Wikipedia, Timothy Lee Richmond was an American race car driver from Ashland, Ohio. He competed in IndyCar racing before transferring to NASCAR's Winston Cup Series. Richmond was one of the first drivers to change from open wheel racing to NASCAR stock cars full-time, which later became an industry trend. He won the 1980 Indianapolis 500 Rookie of the Year award and had 13 victories during eight NASCAR seasons.

Other Resources About Tim Richmond

What Schools Are Affiliated With Tim Richmond?

Tim Richmond is affiliated with the following schools: