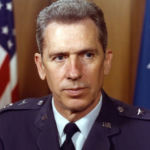 Why Is Timothy I. Ahern Influential?

According to Wikipedia, Timothy I. Ahern was a major general in the United States Air Force. Biography Ahern was born on November 7, 1924, in New Haven, Connecticut. At the age of 15 he entered New Haven State Teachers College. Later he attended the six-week Advanced Management Program at Harvard Business School. He married Kathryn L. Teague, widow of USAF Lieutenant Edward F. Teague. They had one child together and also raised Kathryn's son from her first marriage together. Ahern died on April 16, 2003, and is buried with Kathryn L at Arlington National Cemetery.

Other Resources About Timothy I. Ahern

What Schools Are Affiliated With Timothy I. Ahern?

Timothy I. Ahern is affiliated with the following schools: