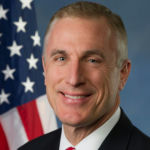 Why Is Tim Murphy Influential?

According to Wikipedia, Timothy Francis Murphy is an American psychologist, author, and former politician. A Republican, he served as the U.S. representative for Pennsylvania's 18th congressional district from 2003 until his resignation in 2017. He is a former member of the Pennsylvania State Senate, representing the 37th Senate district, and a commander in the United States Navy Reserve. The 18th district included several suburbs south of Pittsburgh. It was later redrawn by order of the Pennsylvania Supreme Court and became the 14th Congressional District, which includes portions of Westmoreland and southern Allegheny County as well as Fayette, Greene and Washington counties. Murphy consistently carried his district with at least 58% of the vote, including unopposed re-election bids in 2014 and 2016.

Other Resources About Tim Murphy

What Schools Are Affiliated With Tim Murphy ?

Tim Murphy is affiliated with the following schools: