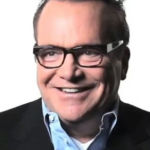 Why Is Tom Arnold Influential?

According to Wikipedia, Thomas Duane Arnold is an American actor and comedian. He is best known for Arnie Thomas on Roseanne , Jackie Thomas on The Jackie Thomas Show , and Tom Amross on The Tom Show . He has appeared in several films, including True Lies , Nine Months , McHale's Navy , Animal Factory , Cradle 2 the Grave , Mr. 3000 , Happy Endings , The Great Buck Howard , and Madea's Witness Protection . He was also the host of The Best Damn Sports Show Period for four years, and appeared on Sons of Anarchy.

Other Resources About Tom Arnold

What Schools Are Affiliated With Tom Arnold ?

Tom Arnold is affiliated with the following schools: