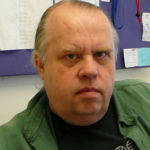 Why Is Tom Duff Influential?

According to Wikipedia, Thomas Douglas Selkirk Duff is a computer programmer. Early life Duff was born in Toronto, Ontario, Canada, and was named for his putative ancestor, the fifth Earl of Selkirk. He grew up in Toronto and Leaside. In 1974 he graduated from the University of Waterloo with a B.Math and, two years later, was awarded an M.Sc. from the University of Toronto.

Other Resources About Tom Duff

What Schools Are Affiliated With Tom Duff?

Tom Duff is affiliated with the following schools: