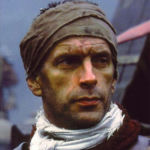 Why Is Tomas Arana Influential?

According to Wikipedia, Thomas Clifford Arana is an American actor. He is best known for his roles in the films The Hunt for Red October , The Bodyguard , L.A. Confidential , Gladiator , The Bourne Supremacy , Limitless and The Dark Knight Rises .

Other Resources About Tomas Arana

What Schools Are Affiliated With Tomas Arana?

Tomas Arana is affiliated with the following schools: