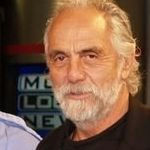 Why Is Tommy Chong Influential?

According to Wikipedia, Thomas B. Kin Chong is a Canadian-American actor, comedian, musician, and activist. He is known for his marijuana-themed Cheech & Chong comedy albums and movies with Cheech Marin, as well as playing the character Leo on Fox's That '70s Show. He became a naturalized United States citizen in the late 1980s.

Other Resources About Tommy Chong