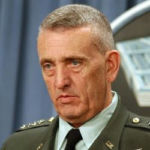 Why Is Tommy Franks Influential?

According to Wikipedia, Tommy Ray Franks is a retired general in the United States Army. His last army post was as the Commander of the United States Central Command, overseeing United States military operations in a 25-country region, including the Middle East. Franks succeeded General Anthony Zinni to this position on 6 July 2000 and served until his retirement on 7 July 2003.

Other Resources About Tommy Franks

What Schools Are Affiliated With Tommy Franks?

Tommy Franks is affiliated with the following schools: