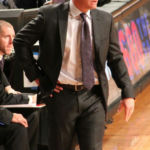 Why Is Tony Bennett Influential?

According to Wikipedia, Anthony Guy Bennett is an American former professional basketball player and since 2009 the men's basketball head coach at the University of Virginia, with whom he won the NCAA Championship in 2019. Bennett is a three-time recipient of the Henry Iba Award, two-time Naismith College Coach of the Year, and two-time AP Coach of the Year. Bennett holds records for career winning percentage and single-season wins at Washington State as well as Virginia, and is one of three coaches in history to lead his program to ten consecutive winning ACC records. Bennett is one of three coaches to receive the ACC Coach of the Year award four or more times.

Other Resources About Tony Bennett

What Schools Are Affiliated With Tony Bennett ?

Tony Bennett is affiliated with the following schools: