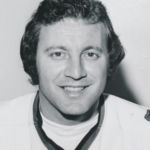 Why Is Tony Esposito Influential?

According to Wikipedia, Anthony James "Tony O" Esposito was a Canadian-American professional ice hockey goaltender, who played 16 seasons in the National Hockey League , 15 of those for the Chicago Black Hawks. He was one of the pioneers of the now popular butterfly style. Tony was the younger brother of Phil Esposito, a centre. Both brothers had notable careers and are enshrined in the Hockey Hall of Fame. Esposito's jersey number 35 was retired by the Blackhawks in 1988.

Other Resources About Tony Esposito

What Schools Are Affiliated With Tony Esposito?

Tony Esposito is affiliated with the following schools: