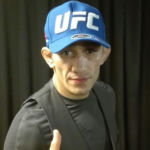 Why Is Tony Ferguson Influential?

According to Wikipedia, Anthony Armand Ferguson Padilla is an American professional mixed martial artist. He currently competes in the Lightweight division in the Ultimate Fighting Championship . He is a former Interim UFC Lightweight Champion. Ferguson debuted in 2008, and has been with the UFC since he won The Ultimate Fighter 13 in 2011. He is trained in freestyle wrestling, boxing, jiu-jitsu, Muay Thai, and Wing Chun. As of July 11, 2022, he is #11 in the UFC lightweight rankings.

Other Resources About Tony Ferguson

What Schools Are Affiliated With Tony Ferguson?

Tony Ferguson is affiliated with the following schools: