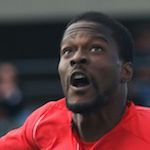 Why Is Tosaint Ricketts Influential?

According to Wikipedia, Tosaint Antony Ricketts is a Canadian professional soccer player who plays for Vancouver Whitecaps FC and the Canada national team as a forward. Club career Early career Ricketts was one of the top short-distance runners in Alberta, and he began his youth career playing Division I soccer for the Green Bay Phoenix at University of Wisconsin Green Bay.

Other Resources About Tosaint Ricketts

What Schools Are Affiliated With Tosaint Ricketts?

Tosaint Ricketts is affiliated with the following schools: