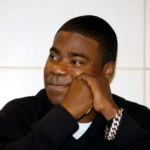 Why Is Tracy Morgan Influential?

According to Wikipedia, Tracy Jamal Morgan is an American stand-up comedian and actor best known for his television work as a cast member on Saturday Night Live and for his role as Tracy Jordan in the sitcom 30 Rock , each of which earned him a Primetime Emmy Award nomination. He currently stars as Tray Barker in the TBS comedy The Last O.G.

Other Resources About Tracy Morgan

What Are Tracy Morgan's Academic Contributions?

Tracy Morgan has made the following academic contributions: