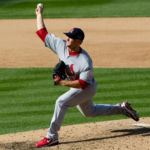 Why Is Trevor Rosenthal Influential?

According to Wikipedia, Trevor Jordan Rosenthal is an American professional baseball pitcher for the Milwaukee Brewers of Major League Baseball . He has played in Major League Baseball for the St. Louis Cardinals, Washington Nationals, Detroit Tigers, Kansas City Royals and San Diego Padres. He made his MLB debut with the Cardinals on July 18, 2012. A power pitcher, Rosenthal is known for a fastball that is difficult for hitters to pick up and reaches velocities at or over . He throws and bats right-handed, stands tall, and weighs .

Other Resources About Trevor Rosenthal

What Schools Are Affiliated With Trevor Rosenthal?

Trevor Rosenthal is affiliated with the following schools: