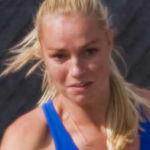 According to Wikipedia, Trīna Šlapeka is a retired Latvian tennis player. Šlapeka never won a professional ITF tournament in her career, but, on 28 May 2007, reached her best singles ranking of world number 1400. On 23 April 2007, she peaked at world number 948 in the doubles rankings. She holds a win–loss record of 4–1 for Latvia in Fed Cup competition, having represented her country in 2007 and 2008 in Mauritius and Armenia respectively. Her latter appearances helped the team get promoted to Group II of the 2009 Fed Cup Europe/Africa Zone.