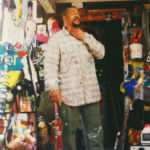 Why Is Tyree Guyton Influential?

According to Wikipedia, Tyree Guyton is an artist from Detroit, Michigan. He is married to Jenenne Whitfield and continues to live in Detroit. Before becoming an artist, Guyton worked as a firefighter and an autoworker and served in the U.S. Army. He studied art at Marygrove College, Wayne State University, and the Center for Creative Studies—now College for Creative Studies. Guyton counts his grandfather, Sam Mackey, and Detroit artist Charles McGee as his greatest influences.

Other Resources About Tyree Guyton

What Schools Are Affiliated With Tyree Guyton?

Tyree Guyton is affiliated with the following schools: