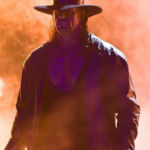 Why Is The Undertaker Influential?

According to Wikipedia, Mark William Calaway , better known by the ring name The Undertaker, is an American retired professional wrestler. Widely regarded as one of the greatest professional wrestlers of all time, Calaway spent the vast majority of his career wrestling for WWF/E, and is best known for his critically acclaimed "Deadman" Undertaker gimmick, for which he was inducted into the WWE Hall of Fame in 2022. Calaway remains employed for WWE through a 15-year contract signed in 2019.

Other Resources About The Undertaker

What Schools Are Affiliated With The Undertaker?

The Undertaker is affiliated with the following schools: