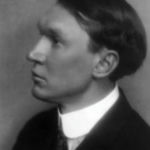 Why Is Vachel Lindsay Influential?

According to Wikipedia, Nicholas Vachel Lindsay was an American poet. He is considered a founder of modern singing poetry, as he referred to it, in which verses are meant to be sung or chanted. Early years Lindsay was born in Springfield, Illinois where his father, Vachel Thomas Lindsay, worked as a medical doctor and had amassed considerable financial resources. The Lindsays lived across the street from the Illinois Executive Mansion, home of the Governor of Illinois. The location of his childhood home influenced Lindsay, and one of his poems, "The Eagle Forgotten", eulogizes Illinois governor John P. Altgeld, whom Lindsay admired for his courage in pardoning the anarchists involved in the Haymarket Affair, despite the strong protests of US President Grover Cleveland.

Other Resources About Vachel Lindsay

What Schools Are Affiliated With Vachel Lindsay?

Vachel Lindsay is affiliated with the following schools:

What Are Vachel Lindsay's Academic Contributions?

Vachel Lindsay has made the following academic contributions: