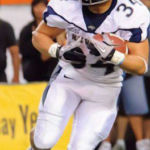 Why Is Vai Taua Influential?

According to Wikipedia, Vailala Lima "Vai" Taua is an American football coach and former running back who is currently the assistant head coach at Nevada. He played college football at Nevada and was briefly in the NFL as an undrafted free agent for the Buffalo Bills and Seattle Seahawks from 2011 to 2012.

Other Resources About Vai Taua

What Schools Are Affiliated With Vai Taua?

Vai Taua is affiliated with the following schools: