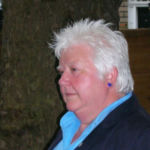 Why Is Val McDermid Influential?

According to Wikipedia, Valarie "Val" McDermid, is a Scottish crime writer, best known for a series of novels featuring clinical psychologist Dr. Tony Hill in a grim sub-genre that McDermid and others have identified as Tartan Noir.

Other Resources About Val McDermid

What Are Val McDermid's Academic Contributions?

Val McDermid has made the following academic contributions: