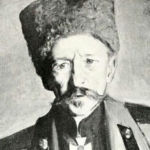 Why Is Vasily Gurko Influential?

According to Wikipedia, Vasily Iosifovich Romeyko-Gurko served for a brief period as a Chief-of-Staff of the Imperial Russian Army before being forced out of the country in exile following the October Revolution of 1917. Biography Gurko was the son of Iosif Gurko and brother of Vladimir Gurko. He graduated from the Page Corps, an elite school for the children of Russian nobility in 1885 and from the General Staff Academy in 1892. He served as a military attaché to the Transvaal Republic and rode with the Boer Army in the Second Boer War. He was a military attaché to Berlin in 1901. During the Russo-Japanese War of 1904 to 1906, he initially held an assignment at the office of the Quartermaster-General of the Manchurian Army, but later commanded a Cossack brigade. After the end of the war, from 1906 to 1910, he served as chairman of a commission to investigate the reasons for the failure of Russian forces in that conflict.

Other Resources About Vasily Gurko

What Schools Are Affiliated With Vasily Gurko?

Vasily Gurko is affiliated with the following schools: